The Japan Cricket League Division One is famed for its unpredictability and so it proved once again last weekend as the top two teams in the league campaign both crashed out in stunning style.

MAX CC, whose form completely vanished after their Round Five defeat to the Tigers, exacted a spectacular revenge on the table toppers. A wicket in the first over from Takuro Hagihara set the ball rolling, and turned out to be the only batsman not to be dismissed caught as the Tigers batting imploded against the spinners. 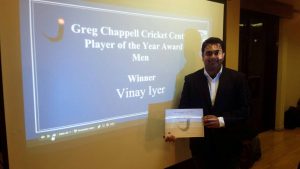 Vinay Iyer was the star of the show, grabbing 4/18 including the key wicket of Sabaorish Ravichandran for just 14. He was backed up with 4/35 from Sachin Sererath and the catching quality in the field and general energy that had disappeared from MAX displays of recent months proves why they are such a force to be reckoned with at this stage of the season.

Tigers managed just 90 all out and a 41-ball 52* from Supun Nawarathna made short work of that. Iyer anchored the innings at the other end with an unbeaten 30* to cap a fine all-round display and a nine-wicket victory. Play like this in the Final and MAX could yet earn their third title in four years.

Their opponents will be the Chiba Sharks who reached their first final since the heyday of 2010 and 2011 when they made successive finals and won their solitary JCL title. Eight years of waiting for another has them hungrier than ever for success.

Theirs was perhaps an even more dominant display against an Alpha Quashers side overawed by the occasion. Batting first they too were a man down in the first over and at 27/5 after 18.2 overs the writing was on the wall.

The Quashers were digging in and seemed desperate to bat time and eek out as many runs as possible but Tsuyoshi Takada continued his excellent bowling form with 3/13 and never allowed easy runs. 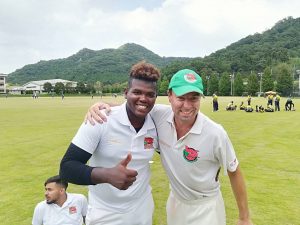 60 all out in 33 overs was a huge disappointment and the Sharks openers set about the task in startling fashion as Davian “Clampa” Johnson clubbed 40* from 34 balls, although he did offer a couple of chances and things continued to go wrong for the Quashers as these went to ground. Sharks skipper Dhugal Bedingfield was able to quietly sip tea at the other end and admire the show, finishing 15* as a ten-wicket mauling was completed in just eight overs.

This was a disappointing end for the Quashers, but should not detract from what has been an excellent season for them and they will now turn their attention towards defending their T20 Title in the Japan Cup.

Both Chiba Sharks and MAX CC have a wealth of Japanese talent which will be on display at the SICG on Saturday 29th September. Before then many of those involved will be touring Hong Kong for the East Asia Cup and of course taking part in the Embassy Cup & Summer Picnic on September 22nd/23rd, which we hope the cricket community as a whole will come out and support. If anyone wishes to receive more information about either of these events please contact a-curr@cricket.or.jp.