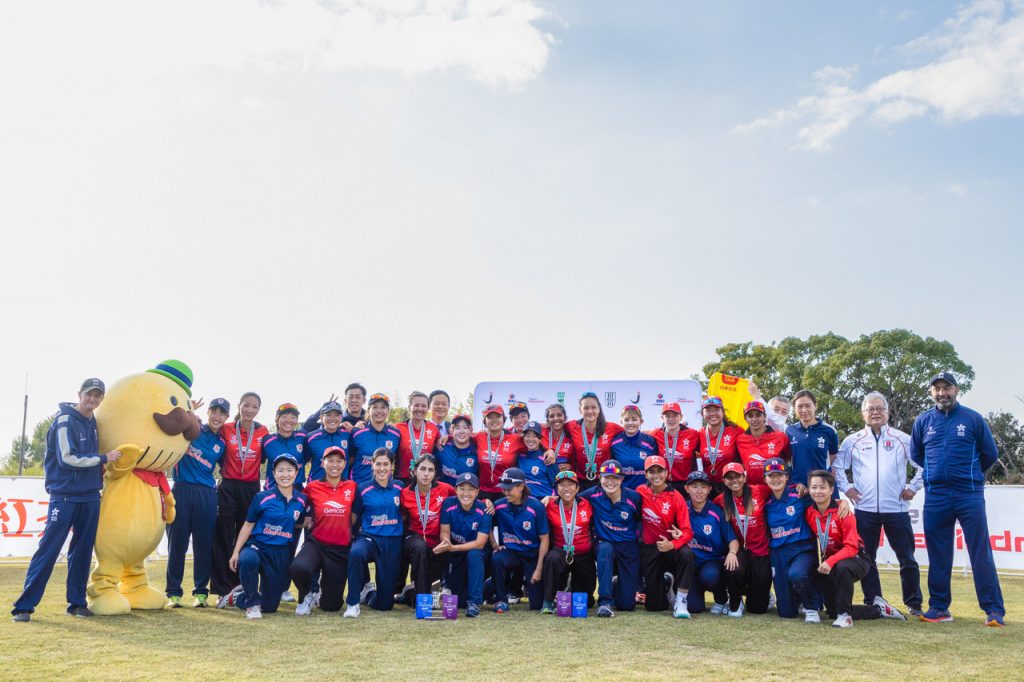 The Hong Kong Women’s team wrapped up a clean sweep of matches in the 2022 East Asia Cup, but were pushed even closer than the previous day in match four.

After winning the toss and choosing to bowl, Japan were able to take wickets early for the first time in the series and expose the Hong Kong middle order.

First Shimako Kato claimed her maiden international wicket by bowling Mariko Hill for seven, and then Mai Yanagida took an excellent catch over her shoulder to remove the dangerous Natasha Miles for 23 at the end of an expensive Ayumi Fujikawa over. 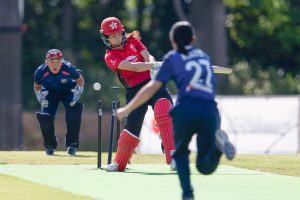 The next wicket to fall was a landmark breakthrough for Shizuka Miyaji, claiming her 45th wicket for Japan in internationals with a well held catch by Erika Oda to remove Shanzeen Shahzad for 14. That wicket moves Miyaji beyond Ayako Nakayama to become Japan Women’s leading wicket-taker.

Stand-in captain Yasmin Daswani (20) and Ruchita Venkatesh (23*) both hung around for a while but wickets kept falling with six different Japanese bowlers chipping in and Hong Kong eventually finished 101 for seven from their 20 overs.

Given the way Japan had batted the previous day there was plenty of hope that the home team could finish on a high, but neither Erika Oda (15) nor Akari Kano (7) were able to repeat their heroics from the previous day.

Ahilya Chandel held the innings together, striking three boundaries on her way to 26 from 28 deliveries. Her dismissal, in the middle of a productive over for Japan, formed part of a collapse where four wickets fell for 15 runs in 14 deliveries at a key stage of the game.

Just as the required rate looked to be getting too much for Japan, captain Mai Yanagida struck back-to-back boundaries from an Iqra Saha over that cost 16 runs and left the home team needing 16 from 25 balls with four wickets in hand.

A tense finish ensued; Mariko Hill conceded just four runs off the 17th over and the tide really turned the following at the the following end when Betty Chan dismissed Minami Yoshioka for eight in an over that yielded just a single run for Japan.

The equation was back to 11 off 12 balls with Ayumi Fujikawa, batting for the first time in international cricket, up against the most experienced bowlers Hong Kong possess. The youngster battled through the 19th over from Hill and left Japan needing nine from the final six deliveries.

Some brave and at times frantic running between Yanagida (18*) and Fujikawa (4*), including two off the last ball, brought the scores level at the end of the 20 overs, both teams making 101 for seven.

A Super Over was then required to split the teams, a situation always likely to favour Hong Kong such is the quality of their opening batters, and so it proved as they were set a nominal target of five to win, which Mariko Hill secured with a boundary through square leg on the third ball of the over.

All in all there was a significant improvement from Japan in the third and fourth matches which showed that these teams are perhaps more closely matched than the final 4-0 scoreline suggests, but the experience and better game sense of Hong Kong proved decisive in key moments.

Ruchita Venkatesh was named player of the match, while in the closing ceremony for the tournament it was the Hong Kong players who took home all the individual awards, highlighting just how much the key players made the difference.