The Chiba Sharks reached their third Grand Final in four years at the expense of previously unbeaten MAX CC thanks to a well made 65 from Ibrahim Takahashi and a rousing spell by Hamid Bacha.

Batting first the Sharks battled to 200/8 from their 40 overs as Takahashi built on the early foundations laid by Marcus Thurgate (30) and Tanmoy Mukherjee (27). MAX used eight different bowlers and seven of them collected wickets and with the power in the batting line up would have been confident in the chase.

Much depended on Vinay Iyer, who made a composed 62, but when Bacha (three for 25) breached his defences MAX were suddenly six down and 77 runs adrift. It was too big an ask for the title hopefuls who were eventually all out for 158 as the Sharks claimed a memorable win by 42 runs.

The victory was made all the more impressive by the fact that the Sharks were missing their long-standing captain Dhugal Bedigfield to a hamstring injury suffered in the Japan Cup Final. He remains a doubt for the final, but will no doubt be in the oxygen chamber to give himself the best chance of a timely recovery. 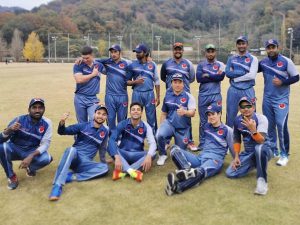 While the Sharks are now serial attendees at the season showpiece, the Tokyo Falcons will make their first appearance in the Division One Final after avenging last year’s semi final defeat against the reigning champions Tigers CC.

Batting first they also scrapped to 198/9 in their 40 overs, thanks in large to 56 from Kuldeep Bisht, although a ninth-wicket partnership of 54 in seven overs between Abhi Telang (31*) and Jagdish Rana (21) ultimately took them out of the Tigers claws.

Falcons were able to take regular wickets and only during a 50-run partnership for the fourth wicket between Sabaorish Ravichandran (37) and Manoj Bhardwaj (13) was there any real need for concern.

The Tigers captain coming in at number six seemed low, and when he became the first of three victims for Bisht the writing was on the wall. The Falcons ran through the Tigers tail, taking the last six wickets for 38 runs and booking their place in the final with a comprehensive 79-run victory to end the Tigers title defence.

In a twist of fate the Grand Final will be the first meeting between these teams this year, after their match fell foul of the COVID delays. Tune in this Saturday to see if the Falcons can claim their first ever title, or if the Chiba Sharks can claim their third.

In Division Two the Men In Blue 2nd XI defeated the unbeaten Paddy Foleys by five wickes thanks to an unbeaten 59 by Sopan Shirdhonkar. They will face off against the Tokyo Rangers who got past the Falcons 2nd XI, also by five wickets, thanks to 65 from Kasun Ganesh.

The Falcons were not to be denied in Division Three however, and retained hopes of double glory as their 3rd XI achieved what the 2nds could not in marching past the Tokyo Rangers 2nd XI by seven wickets after Shridhar Choudhary had taken four for 11 to roll the Rangers over for just 101. They will contest the final against another team aiming for a double as the Men In Blue 3rd XI chased down the Tigers 117 all out by five wickets thanks to 40 from Saurav Bhowmik.

Thanks again to the umpires over the weekend and good luck to all teams over the 27th and 28th as the season reaches its long awaited climax. 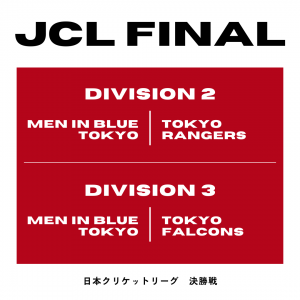 The Semi Final Umpires were: