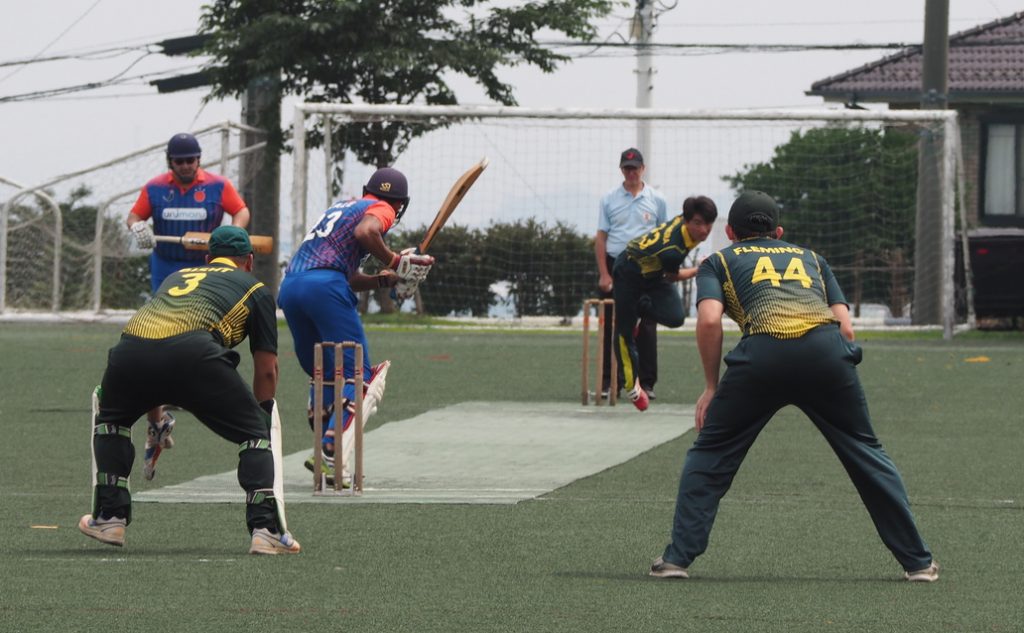 The East Kanto Sunrisers have turned the Japan Premier League on its head by upsetting the South Kanto Super Kings in both matches at the Yokohama Country & Athletic Club on Sunday.

Last year’s champions, the Super Kings have had a monopoly on the JPL trophy while the Sunrisers have never finished above bottom. 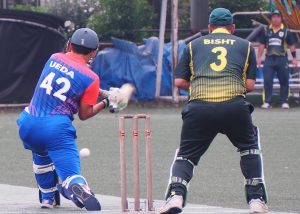 Ueda attempts a sweep on a tough day for batsmen

Super Kings captain Saborish Ravichandran won the toss and batted in the morning match but his side were soon in trouble thanks to some tight bowling from Rui Matsumura and Vikash Ranjan.

Ravichandran (46 runs) and Mohammed Anas combined for a steadying partnership but were unable to accelerate as the Sunrisers bowlers continued to apply pressure.

The off spin of Dhugal Bedingfield (2/19) proved to be very effective on the slow pitch and it took some late hitting from Nikhil Chhajed to bring the Super Kings to a score of 114/7 off their 20 overs.

Abhishek Telang and Japan international Kendel Fleming opened the batting for the Sunrisers and batted aggresively in the power play, scoring 55 runs for the loss of one wicket.

Ravichandran continued to fight for his team, bowling four tight overs, but the Sunrisers were able to comfortably complete the chase three wickets down in the 17th over.

Fleming was awarded the Player of the Match for his unbeaten 67, which included seven boundaries and three sixes.

The Super Kings aren’t used to losing so it was clear that a different approach would be necessary for game two.

Settling on a more aggressive approach, veterans Prashant Kale and Anton Winston were sent in to open the batting.

The pair launched into the Sunrisers attack, taking 55 off the power play before Winston fell for a quickfire 28.

Kale continued the onslaught and when he was caught on the boundary for 43 at the end of the 12th over the Super Kings were in a commanding position at 92/2. 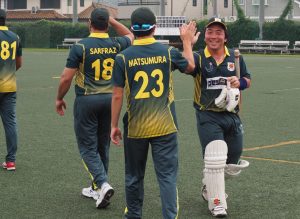 However, they were unable to capitalise on their position, the Sunrisers bowlers fighting back with some clever bowling and the Super Kings struggling to score on the slowing pitch, eventually limping to 132/7 off their 20 overs.

The Sunrisers again decided that the power play was the best time to score runs and this time captain Hanif Khan joined Fleming to provide the fireworks, the pair taking 65 from the first seven overs of the innings.

The Super Kings were not done with yet though, tall paceman Chhajed charging in to take four wickets through the middle overs.

The Sunrisers have added to their batting depth in the off-season and it was two new signings Tsuyoshi Takada and Manish Kapil who steadied the ship, easing the Sunrisers to another comfortable win with an over to spare. 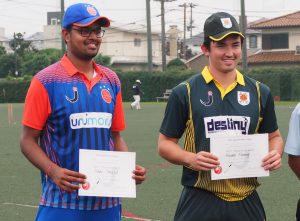 Chhajed and Fleming were named MVPs

A small consolation for the Super Kings was that Nikhil Chhajed was awarded the Player of the Match for his all round performance.

The Sunrisers unexpectedly sit at the top of the table while the Super Kings are sure to come out firing in round two.

The Japan Premier League continues this Sunday July 28th when the West Kanto Hurricanes travel to the Sano International Cricket Ground to take on the North Kanto Lions.

Spectators are very welcome to attend and entrance is free.