Over the course of the season One Short focuses on the Japan Cricket League Division One, but in the newly expanded league this season it would be wrong to not have at least one piece purely for Divisions Two and Three.

Division Two was topped this year by the Tokyo Falcons who finished with a 100% record in the league and took that form into a comfortable win over the Alpha Quashers 2nd XI in the semi final.

Both Tigers CC 2nd XI and Men In Blue finished the season with six wins out of eight and so met in the other Semi Final where MIB ran away to book their place in the end of season showpiece. 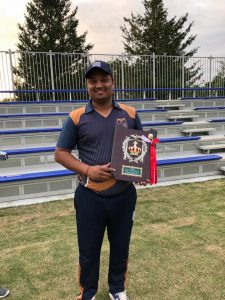 The Final brought together the two dominant batsmen in he league, as Kuldeep Bisht of the Falcons and Abhishek Telang from the MIB went head to head. Between the pair they scored more than 1,000 runs this season including three hundreds and five fifties. Impressive stats.

It was Bisht who had first chance to show his skills as Falcons batted first and the captain led from the front at the top of the order, his 59 helping Falcons post 189/9 in their 40 overs.

Men in Blue had registered some huge scores in Division Two, including a frankly absurd 426 in Round Two, and needed to focus if they were going to inflict a first defeat of the season on the Falcons.

Despite a solid opening stand of 48 between Sanket Pandhari (36) and Ameya Keshkamat (20), and a typically stylish 33 from Telang, MIB lacked the anchor to see them home. Falcons took all ten wickets for 146 inside 32 overs to secure their first JCL title with a 43-run win.

Amrik Singh finished with 3/27, including the key wicket of Telang, to finish with the best figures on the day and it was enough to make him leading wicket-taker in the Division with 18 scalps. Bisht finished as the leading run-scorer, his contribution in the final taking him to 501 runs for the season, ahead of 500 for Telang, albeit in one more innings.

A great first season in the JCL for both sides and they will likely be rewarded with a place in Division One next year, pending confirmation by the league committee.

The inaugural season in Division Three was a mix of development cricket and the discovery of a new collection of players keen to make their mark. Tigers CC continued their fine campaign across all divisions as their Third XI finishing top of the table, but had suffered a mighty defeat to the Rising Stars early in the season, before getting their revenge in Round 11 with a win by a single wicket. When the two teams made the final everyone knew a contest was to be had.

Rain had led to the match being rescheduled twice, with the second attempt being washed out a single over before the match would have been called as a result, so it was with much anticipation that things finally got going.

In the eventual match up the Tigers batted first and despite early wickets managed to reach 151/5 from 25 overs as rain again threatened to ruin the occasion. A 98-run partnership between Nagarajan (60) and captain Koul (35) underpinned the score and gave Tigers a great shout at finally getting their hands on a trophy in 2018.

When Pamal Utham (4/31) ripped through the top order to leave the Rising Stars faltering at 49/5 it looked like the game was up, but then a remarkable rearguard action began to unfold. 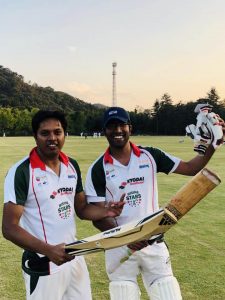 Ashik Chowdhury and Abu Hasnat are the two leading run scorers in the Division, so handy players to come in at numbers six and seven. A 57-run partnership got the recovery going before Hasnat fell for 21, but Chowdhury was unperturbed.

He added a further 41 with Hossain Imam (12), bringing up his second half century of the season on the way to a remarkable 70* from 48 balls to win the title for his side by three wickets with an over to spare.

Further joy was to come for Rejwanur Kabir who finished as leading wicket-taker with 17, although a special mention to 14-year-old leg-spinner Masato Morita who finished with 10 wickets from just three matches.

Promotion secured for Rising Stars, again pending confirmation by the league committee, and a day of great drama showing the depth in the Japan Cricket League.

Well done to everyone who made the three divisions so successful and we hope to see all come to collect their awards on November 17th.