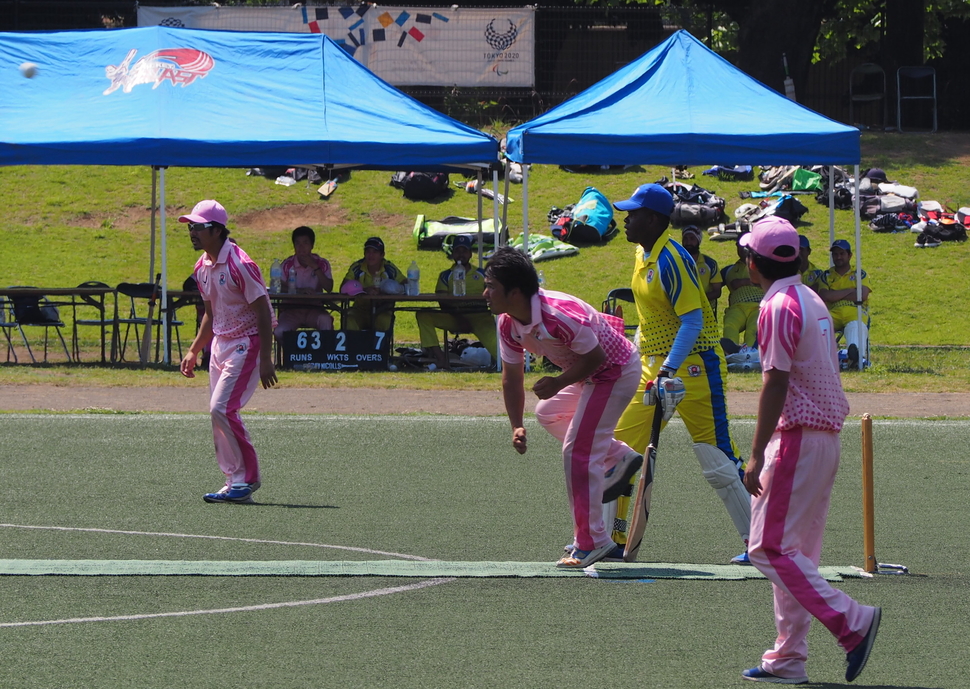 An all-round batting, bowling and fielding performance from the West Kanto Hurricanes helped them defeat the dogged East Kanto Sunrisers in both games in Akishima in the opening round of the Japan Premier League T20 on Sunday.

In game one, Sunrisers captain Dhugal Bedingfield won the toss and sent the Hurricanes in on the temporary pitch at the Showa Athletic Ground. 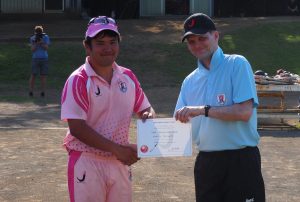 Taniyama was awarded the MVP in game 1

The Sunrisers celebrated early as Vivek Singh (2/10) removed Raheel Kano with the second ball of the day but from that point on the Hurricanes took control of the game thanks to a 90 run partnership between Makoto Taniyama (36 off 38 balls) and Supun Nawarathna (49 off 34 balls).

The Hurricanes looked set for a huge total but somehow fell in a hole in the second half of their innings.

The Sunrisers used eight bowlers but, alarmingly, it was the part-time spin of Bedingfield (5/16) that put the brakes on the Hurricanes innings and in the end the team from West Kanto limped to 123/9 off their 20 overs.

The Sunrisers have added some muscle to their batting line up in the off season and new signing Hanif Khan was intent on knocking off the modest total.

However, it was the fielding of the Hurricanes that proved the difference between the two teams, Nawarathna, converted baseballer Shogo Kimura, and Taniyama pulling off outstanding catches to remove the Sunrisers top three batsmen.

Nozomi Tomizawa’s spell of 2/2 effectively put an end to the Sunrisers hopes while Taniyama (4/18) was awarded the man of the match in the 61 run victory, his leg breaks to hot to handle for the Sunrisers lower order. 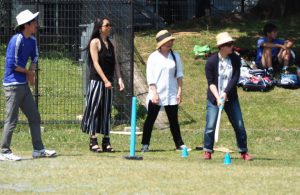 In game two the Sunrisers decided to bat first and put a score on the board but the Hurricanes superb fielding continued with Bebe Miyaji pulling off a stunning catch to remove Bedingfield on the cover boundary.

Hanif Khan smashed three sixes on his way to 33 and received some support from an improved Sunrisers middle order as they posted 137/9 off their 20 overs, Tomizawa continuing his good form with the ball with 3/14.

In reply, openers Taniyama (29) and Miyaji (15) looked to have the chase under control but the Sunrisers uncovered another unlikely wicket taker in Ankur Mehrotra (3/29) who removed the top three Hurricanes batsmen.

The match had swung back into the Sunrisers’ favour but as the run rate required started to climb captain Ota took matters into his own hands smashing 18 runs off the 16th over of the innings. 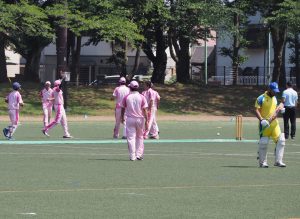 His innings ended on 21 but tailenders Tomizawa and Rui Matsumura showed good composure in reaching the target with four balls to spare.

Tomizawa was presented with the man of the match award for his all-round performance.

The next round of JPL cricket will take place on July 22nd when the Hurricanes travel to the Yokohama Country & Athletic Club to take on the undefeated South Kanto Super Kings and the Sunrisers are hosted in Sano by the North Kanto Lions.