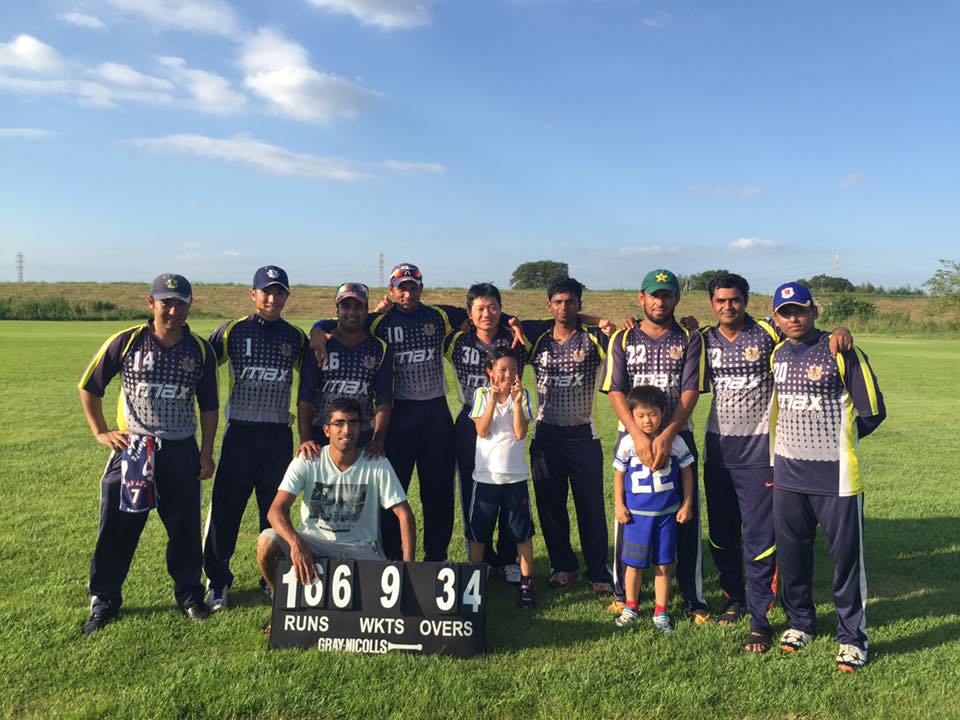 A double dose of irony in this week’s One Short. When choosing the title of this blog we settled on One Short more by luck than judgement, and yet at the completion of 14 rounds of the Japan Cricket League there will be only 13 reports.

Round 13 was washed out as a typhoon made its merry way from Tokyo through Tochigi to wipe out all matches and leave everything in the balance coming into the final round. The matches lost were Sharks vs Wombats, MAX vs Paddy Foleys and Sano vs Wyverns so points were shared out evenly.

It was the Tigers who pulled off the biggest result in the final round, defeating top of the table Sharks – who now head into the Semi Finals without a win since July 10th. Batting first there were contributions throughout the Tigers top order with Rahul Koul (63), Sabaorish Ravichandran (48) and Manoj Bhardwaj (50) leading them to a total of 278/8 from their 40 overs.

In response only Tsuyoshi Takada showed any real spirit for a much changed side, making 41 out of a total of 108 all out with Bhardwaj taking 5/18 to seal a huge win by 170 runs and complete a great day for himself and the newly promoted Tigers, who with the bonus point secured 4th place.

Elsewhere Wombats, the early season pacesetters, came up against a resurgent MAX in a replay of last season’s Grand Final, and the result was the same. Batting first MAX managed a competitive 186 all out, with Vinay Iyer top-scoring with a run-a-ball 41.

The Wombats were cruising after an opening partnership of 96, but the surprise introduction of Supun Nawarathna into the attack caused havoc as he dismissed first Richard Bracefield for an entertaining 64 from just 55 balls, and then dismantled the middle order to finish with figures of 5/17 as Wombats succumbed to 171 all out.

The win for MAX by 15 runs means they leapfrog Wombats into second place in the table, the first time all season the latter have been outside of the top two places.

The second dose of irony is that all these results mean the Semi Finals will be an exact repeat of the Round 14 matches as 1st placed Chiba Sharks look to bounce back against The Tigers, and MAX will hope to repeat the trick on the Tokyo Wombats.

All this meant that Sano CC, despite a tight three wicket win over Paddy Foleys, miss out on a place in the Semi Final by a whisker. Paddy’s, who had the rain to thank for earning them their only two points this season, posted 129 all out in their final outing, which Sano chased down thanks to Munir Ahmad anchoring the innings with 39*.

In Division Two The Tigers 2nds showed their strength in depth by topping the table, and their reward is…you guessed it…yet another match against Chiba Sharks 2nds, who finished 4th ahead of Wyverns thanks to defeating them earlier in the season. The other Semi Final will be contested by Paddy Foley’s 2nds and Adore CC, who finished second and third respectively.

The Semi Finals of both divisions will take place this weekend.