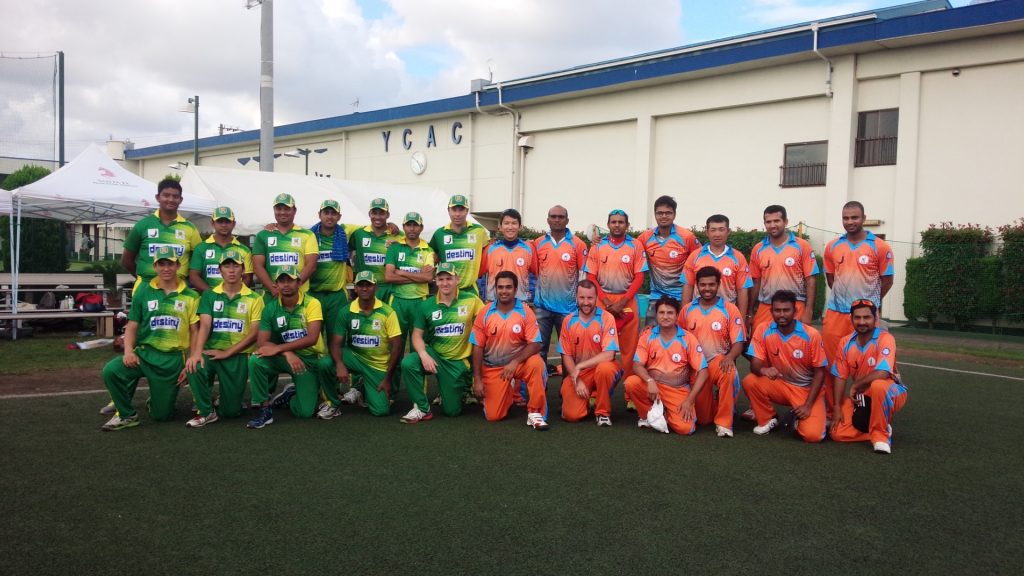 The North Kanto Lions and South Kanto Super Kings entered match day 2 unbeaten. Both teams were playing at home. How would they fare against the talented but erratic West Kanto Hurricanes and the battling East Kanto Sunrisers?

In game one at the Yokohama Country and Athletic Club the East Kanto Sunrisers won the toss and batted against the South Kanto Super Kings. Tight bowling throughout the innings restricted the Sunrisers from forming any partnerships of note, the spin combination of Vinay Iyer (3/10) and Sabaorish Ravichandran (3/15) particularly effective on the slow pitch. Some innovative batting by Sunrisers captain Paul Grant got his team to a below-par score of 95.

Masaomi Kobayashi and Iyer got the Super Kings off to a slow but steady start and they looked very much in control of the chase until the part time off spin of Dhugal Bedingfield claimed four quick wickets to give his team a sniff of an unlikely upset. When the dangerous Prashant Kale picked out Kazi Murad at deep square leg some nerves started to enter the Super Kings’ camp. However, the calming influence of captain Iyer (54*) saw his team comfortably over the line with ten balls to spare.

In game two the Sunrisers were again asked to bat first and were able to cash in on some loose Super Kings bowling to get off to an incredible start. Dlishan Jayarathna (25 off 10) was the prime destroyer in a brief cameo. No less than 10 boundaries were struck in the first three overs but the Super Kings were able to regroup thanks to some accurate bowling from Mohan Govindasamy and Owen Morris. Frustratingly, the Sunrisers were unable to capitalise on their platform, scoring only 44 runs in their final ten overs to finish on 9/132, captain Grant again top scoring with 38.

Prashant Kale was in no mood to hang around, punishing some wayward Sunrisers bowling on his way to a quickfire 42. When he departed Vasanthan Jayakumar joined Ravichandran at the crease and the two batsmen timed the chase perfectly, rotating the strike and uleashing the occasional boundary to relieve the pressure. Rui Matsumura claimed the important wicket of Ravichandran but, with 43 needed of six overs, Jayakumar accelerated, hitting five consecutive boundaries to put the match beyond doubt, the Super Kings wrapping up the match with seven balls to spare.

The West Kanto Hurricanes got off to a disasterous start in game one at the Sano International Cricket Ground against the North Kanto Lions. The Hurricanes batting order was decimated by the pace of Arosh Perera and Buddhika Nanayakkara before captain Tomoki Ota teamed up with tail-ender Shodai Yamada to add a semblance of respect to the scorecard.

82 runs was never going to be enough though and Lions opener Supun Nawarathna (41*) did not waste any time, launching four massive sixes to quickly take the game away from the Hurricanes. A wicket each to Takuro Hagihara and Shodai Yamada did little to stem the flow of runs as the Lions finished with a comfortable 8 wicket win.

The onslaught continued in game two as the Lions compiled a JPL record 7/216 on the back of ex-Japan international Hanif Khan’s 63 ball 115, which included 9 fours and 9 sixes. The Hurricanes were left ruing missed chances, Khan’s innings effectively taking the game away from the Hurricanes. Nawarathna (42) and Chula Rodrigo (37) provided good support for Khan whilst Hagihara held his head up high for the Hurricanes returning figures of 3/34.

An inspired opening stand from Ken Okoshi (22 off 15) and Raheel Kano (37 off 16) saw the Hurricanes begin their run chase at the required run rate of 11 an over. Both fell in quick succesion at the end of the power play but Makoto Taniyama (26 off 14) continued the flow of boundaries and at the half way point the Hurricanes were well and truly on target for a close finish. However, they were unable to sustain the momentum, Nanayakkara ripping through the middle order. The Hurricanes fell 75 runs short but won plenty of admirers with their fighting spirit.

Match day 3 on October 16th will feature the much anticipated clash between the Lions and the Super Kings to determine the JPL champions for 2016.