Round One: Three Centuries Start Start Season in Style

The fast outfields of Sano in spring are often a batters paradise and so it proved in Round One of the Japan Cricket League as three players struck centuries to power their teams to victory.

The most impressive of the lot was made by Shogo Kimura as Wyverns chased down MAX CC’s 222/9 with an over to spare.

Supun Nawarathna had set the scene for the day, striking seven sixes on his way to 69 from 49 balls in a match reduced to 35-overs per side. Tomonoshin Oki continued where he finished the 2021 season by grabbing three for 34.

MAX dismissed the dangerous Kano and Kawashima early and at the halfway stage had only managed 80/4. It was not until the 24th over when Kimura began to find his range, bringing up his half century off 73 balls with a six off Vinay Iyer. At that stage Buddika Nanayakkara (46 off 33) joined him and the game turned dramatically.

As the two set about a partnership of 127 in 78 balls, Kimura became increasingly aggressive. With five overs to go 70 runs were still needed, and Wyverns got there with an over to spare as Kimura struck seven sixes in his last ten balls (12 overall) to bring up his first ever century in the JCL off 106 balls and eventually finishing 121* to lead his team to a five wicket victory. 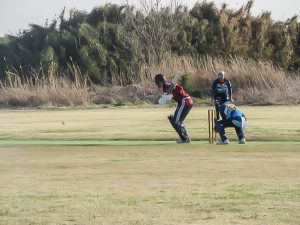 At the same time, Tokyo Rangers were busy making their own mark, winning their first ever match in the Division thanks to a century from last years Japan Cup Finals MVP, Don Bhanuka.

Coming up against fellow promoted side Paddy Foleys, The Rangers made a great start as Malith Neranjan (four for 10) struck four times in his first five overs. A half century from Ashiq Hussain (54), in partnership with Waseem Javed (44) helped Paddy’s reach 165 before Rangers knocked them all over.

Bhanuka was imperious in the chase however. Opening up he struck 109* off 73 deliveries with seven sixes to knock off the total in just the 24th over, giving Rangers a winning bonus point.

Since Once Short began in 2016 Dhugal Bedingfield has made four hundreds and two 70s in Round One at an average of 149.5 (in 2020 his Round 1 match was washed out), and it was the Alpha Quashers who were on the receiving end this year as the Chiba Sharks captain enjoyed himself in front of the cameras of the featured match of the round.

Bowling first the Sharks managed to dismiss the Quashers for just 215 in the 40th over with Noor Ibrahim top scoring with a run-a-ball 61. Hiroshige Murakawa the pick of the bowlers for the Sharks with three for 32.

Bedingfield coasted to a chanceless hundred from 79 balls, supported by 40 from Marcus Thurgate and 49* from Tanmoy Mukherjee as the Sharks began their title defence in ominous fashion with a win by nine wickets and a bonus point as well.

Negi dismissed both Wombats openers for a combination of 12 runs before Saurav Bhowmik mopped up the tail with three wickets for four runs in ten balls as Men in Blue routed the Wombats for just 105, new captain Muhamma Ali the only real contribution with 33.

Negi then wallopped 35 from 17 balls to get the chase off to a flyer as the total was reached in the 11th over to give the umpires a nice early finish and a bonus point win for MIB by seven wickets. 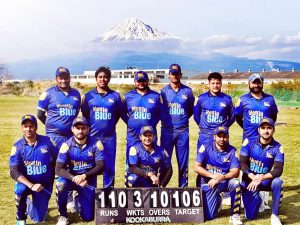 Tokyo Falcons, runners up in 2021, made hard work of chasing the 186/9 posted by the Rising Stars in their opener. The Rising Stars were grateful to a couple of half centuries from Udaibus Sayeed (53) and Ashik Chowdhury (58) while three wickets apiece for Sanket Pandhari and Dev Mishra did the damage for the Falcons.

At 128/2 the Falcons seemed to coasting thanks to 69 from Ankit Chawla before the Rising Stars roared back into it by taking six wickets for 46 runs and at 174/8 things were a bit nervy before the title challengers squeaked over the line by two wickets.

In the final match of the round the Tigers had an easy win against Sano CC, sharing wickets around as they dismissed Sano for just 144, despite a 54-run partnership for the second wicket between Munir Ahmad (50) and Shu Noguchi (18).

Anil Kumar and Anurag Singh both made 36 at the top of the order as the Tigers swept home with four wickets to spare.

After the first round, the points table is as it stands below. 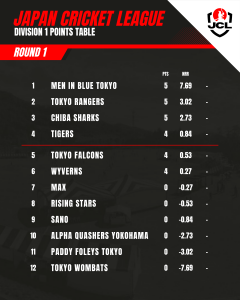 The featured match of Round Two will be this Saturday, April 16th, as Sano CC take on Tokyo Falcons, be sure to tune in to that!