JCL Round Seven Report: Wyverns Push for Play Off Place 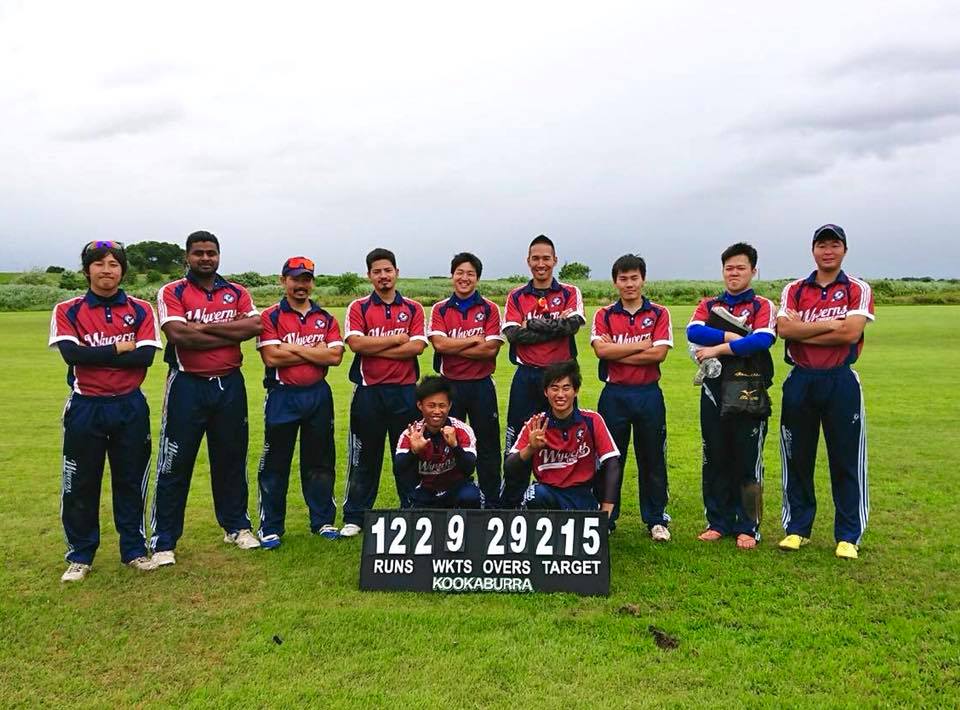 The race for the top four in the JCL took an interesting turn in Round Seven as outsiders Wyverns crushed perennial contenders Tigers in a display of genuine quality . 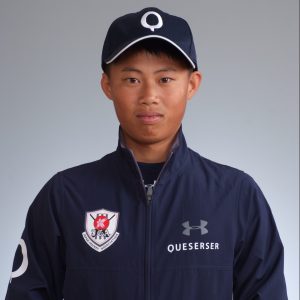 Wataru Miyauchi is having a golden season so far and registered his second successive half century to move him second in the run scoring charts. His 62 anchored Wyverns as they batted first before 44 each for Shogo Kimura and Buddika Nanayakkara, in equally aggressive fashion, propelled the total to above 200.

The pair put on 81 in less than nine overs, and crashed seven sixes between them to pile pressure on the Tigers bowlers. Ankush Mahasaheb (3/48) grabbed three wickets at the end of the innings but 214/8 looked daunting for a struggling batting line up.

Several Tigers batsmen made starts, but none were able to go on. Division One debutant Kushal Kamat was top scorer with 28, but more application was needed if the target was ever going to be in danger.

Yusuke Wakuta (4/36) was the main man for Wyverns with the ball, while Raheel Kano threw up some grenades to collect 3/28 as they dismissed the Tigers for just 122 to complete a victory by 92-runs and leapfrog Tigers into fourth place, earn a valuable bonus point to boot. After three defeats in a row for Tigers last seasons table toppers will be fearing for their finals place. 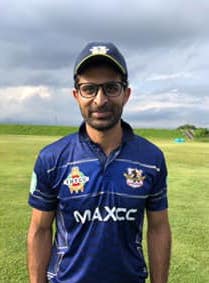 In the clash of the top two it was MAX CC who completely overwhelmed the Alpha Quashers to stamp their authority over the rest of the division. MAX were indebted to Ali Raza’s maiden Division One century, from 97 balls, and 48* from Masaomi Kobayashi which took MAX to 208/9 in their 40 overs.

No other MAX batsmen made 20 as Quashers showed their skills with the ball, Nikhil Chhajed the pick with 3/28 and five bowlers collecting wickets.

Quashers made a steady start but a double blow from Prabath Sankalpa (2/22) in the 12th over changed the course of the chase with five MAX bowlers also collecting wickets. All out for 107 as Talha Tanveer and Sachin Sererath matched each other with three wickets for 13 runs.

That victory by 101 runs earned MAX a four-point lead over the Quashers in second place, who at least stuck out their innings to the 38th over to deny their rivals a bonus point.

The other two teams in contention for the top four are Chiba Sharks and Men in Blue and who produced a decent contest that ultimately ended in victory for the Sharks. Men in Blue were in immediate trouble as their top order was dismantled by Sharks opening tyros; Rui Matsumura (2/32)and Muneeb Siddique (3/30).

Abhi Telang (44) and Vasantha Rajendran (47) dug in to haul their team from a perilous position of 95/7 to a final total of 174/9 which gave them a fighting chance. 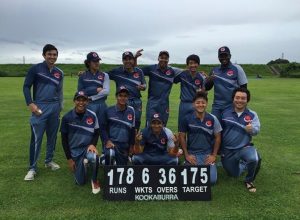 Ashish Jaiswal then had Men in Blue up and about with wickets in his first and second over and the game got increasingly spicy from then on which would later lead to some internal disciplinary sanctions.

As Men in Blue continued to take wickets the Sharks began to look desperate but Davian “Clampa” Johnson (82*) was the huge wicket they could not earn. He eventually found partners in Neel Date (17) then Rui Matsumura (30*), with an unbroken seventh wicket stand of 54 which calmed the chase and carried the Sharks home with three overs and four-wickets to spare. The win also earned Tsuyoshi Takada his first win in as stand-in captain after eight matches spread across four years.

Weather got the better of the match between Wombats and Falcons, which effectively ends the Wombats hopes of a surprise semi final appearance.